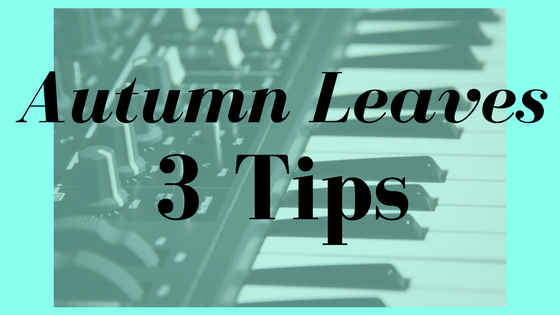 The jazz standard “Autumn Leaves” has been recorded by many popular jazz artists and is widely recognized by listeners, making it a “must-know” tune that should be in the repertoire of advancing jazz players. In this article, I will share three tips for how to approach this tune to help you be fully prepared in a jam session. Tip #1: Learn this tune in two particular keys. “Autumn Leaves” is generally played in one of two keys: G minor or E minor. Popular fake books generally notate the tune in one of these two keys. Both keys are frequently called on jam sessions, so be ready. Check out our “Autumn Leaves” lesson which will teach you a model solo using left hand rootless voicings and analyzes various aspects of how to build a solo over the chord changes. This lesson teaches the song in the key of E minor. Tip #2: Understand the harmonic and melodic minor and use them when soloing over the minor “i” chord. Many jazz students get into the habit of using the dorian mode to solo over minor chords within jazz standards. This is understandable because so often we encounter minor chords as part of a “ii-V-I” progression. Within that progression the minor “ii” chord corresponds to the dorian mode. Because of this, developing jazz players commonly use the dorian mode as the chord scale of choice for soloing over all minor chords. In “Autumn Leaves” the minor chord in measures 7 and 8 is not the “ii” chord in a “ii-V” progression, but rather the “i” chord and therefore the tonic. Let’s look at this tune in the key of E minor. The first 4 measures go through a “ii-V-I-IV” progression in G major, the relative major of E minor (Am, D7, Gmaj, Cmaj). The next 4 measures are a “ii-V-i” in E minor (F#m7b5, B7, Em).